E3 Alliance facilitates Pathways of Promise (PoP), a research and implementation initiative in Central Texas designed to identify and scale strong college and career pathways for high school students that lead to successful transitions to and completion of a post-secondary credential. To develop the optimal career pathways calibrated to state and regional economies as directed by Texas Legislative House Bill 5, E3 conducted a statewide research study analyzing the relationship between the highest level of mathematics mastered by high school students and subsequent education outcomes, including: high school graduation, college and career readiness, college enrollment, 2‐year to 4‐year transfer, college completion, and college completion with a Science, Technology, Engineering, and Mathematics (STEM) or Information Technology (IT) degree.
This brief includes a short description of the research questions and methodology and the leading findings related to who takes and “masters” different levels of math and their education outcomes beyond high school. In this study, “mastery” refers to students who pass both semesters (as opposed to receive a cumulative passing grade over two semesters). The key findings from the study based on longitudinal analyses of both the 2003‐04 and 2008‐09 first time 9th grade cohorts are:
Distribution of Math Mastery for 2008‐09 Texas first time 9th graders enrolled in High School for 4 years:

1. Vastly more students mastered Pre‐Calculus (instead of stopping at Algebra II) under the
legislative requirement known as “4×4” compared to before this requirement. The “4×4”
mandated that high school students default to taking four credits (four years) of each of the
core subject areas: English Language Arts, Mathematics, Science, and Social Studies.

3. Smaller shares of students in rural districts and less populated regions mastered Pre‐Calculus or
an Advanced Placement (AP)1 course as their highest math compared to their urban and
suburban peers.

4. 20% of non‐low income students mastered an AP math class (Statistics, Calculus AB, or Calculus
BC) compared to only 7% of their low income peers.

5. 75% of Asian students mastered Pre‐Calculus or higher compared to 36% of Black, 39% of
Hispanic, and 52% of White students respectively.

6. A higher proportion of males (26%) mastered less than Algebra II as their highest level of math
compared to 17% of females. A smaller share of males mastered Pre‐Calculus (29%) than
females (35%), but the distribution evens out for AP math courses (12% and 13% respectively).

1. Previous research by E3 Alliance revealed that 43% of non‐low income 2012‐13 Central Texas 8th
graders completed Algebra I by the end of their 8th grade year versus only 17% of their low
income peers.2

3. Students who mastered Pre‐Calculus while in high school were twice as likely to enroll in higher
education as their peers whose highest level of math was Algebra II.

4. 36% of 2009 9th graders (enrolled in high school all 4 years) who mastered Algebra II as their
highest math persisted into their second year of higher education, compared to 58% for Pre‐
Calculus, 68% for AP Statistics, 74% and 72% for Calculus AB and BC, respectively.2

5. Income gaps in persistence rates decrease as highest level math mastered increases, though
these gaps do not entirely close. In contrast, whether a student enrolled full time (> 12 credits)
versus part time (< 12 credits) showed an even stronger and more consistent relationship with
2nd year persistence rates. Full time college students persisted at higher rates than part time
students regardless of the highest level of math mastered in high school, with an average
persistence gap of 30 percentage points.

6. Students who mastered at least Pre‐Calculus were more likely to transfer from a 2‐ to 4‐ year
college. Full‐time as compared to part‐time status also had a strong influence on transfer rates.

7. Of the 2004 9th grade cohort who enrolled in higher education, 47% completed within 6 years of
initially enrolling.

a. 36% with Algebra II as highest math mastered completed a post‐secondary credential.
b. Large gaps in completion exist by income and by ethnicity even at highest level of math
mastery.
c. Students with Pre‐Calculus as their highest level of math were nearly twice as likely to
complete their degree as their peers whose highest level was Algebra II.
d. Students with Calculus were more than three times as likely to complete as their
Algebra II peers and were 80% more likely to complete than their Pre‐Calculus peers.

8. Over 1 in 3 (36%) students who completed an AP math course while in high school earned a
STEM or IT post-secondary credential versus 22% of their Pre‐Calculus peers and 8% of their
Algebra II peers.

1 Advanced Placement is a program provided by the College Board that offers “college‐level” courses in the United States and Canada. Students take a standard exam at the end of the course and colleges may opt to offer placement or credit for the course based on those results.
2Wiseman, A. Bailie, C., Gourgey, H. (2015) Pathways of Promise: Student Outcomes in Career and Technical Education Pathways in Central Texas. E3 Alliance: Central Texas.
3 It should be noted that for AP math courses, lower college persistence rates may be a result of students transferring out of state. The post-secondary education data includes only Texas public and private colleges.
Click on the link to read the Report:
Pathways of Promise – Statewide Mathematics Analysis 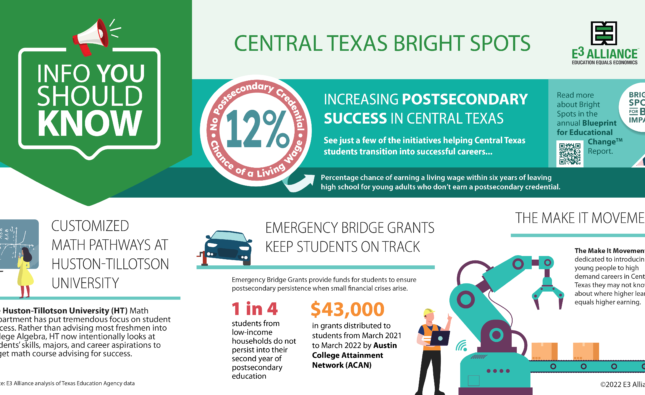 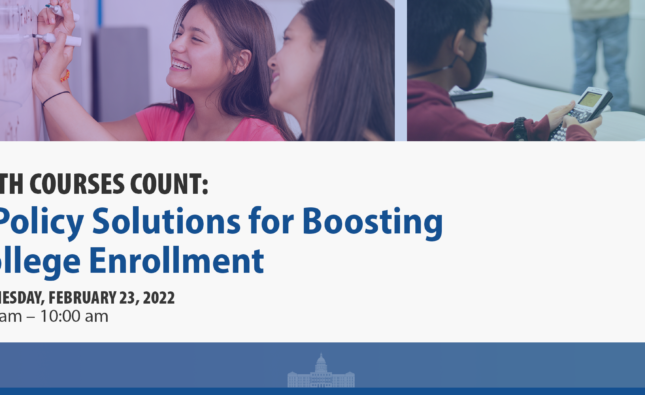