E3 Alliance partnered with Get Schooled (www.getschooled.com) to facilitate the Graduate for Más 2013 Fall Attendance Challenge. The Challenge was a friendly ten week competition to rally students to improve attendance and stay focused on education. More than 135,000 students participated nationally in the 2013 Fall Attendance Challenge.
Get Schooled, in partnership with the Taco Bell Foundation for Teens, sponsored the Challenge in districts throughout the country from October 7 to December 13, 2013.  Partnering with local school districts and backbone organizations such as E3 Alliance, the Challenge provided students with incentives and fun, educational activities that engage students while providing college planning information and promoting a peer culture that supports attendance improvement and academic success.
High absenteeism has been a challenge in Central Texas. Each year, Central Texas students are absent 2.4 million days of school and miss more days of school than their peers across the state in every grade.  Each day our students miss costs our schools about $38 in lost state revenue. Across Central Texas, our schools have been losing more than $91 million a year!  That’s why E3 Alliance spearheaded a regional campaign to improve attendance starting in 2011. Since the start of the campaign, Central Texas schools have saved more than $12M in increased revenue due to improved attendance.
Winners of the 2013 Fall Attendance Challenge:
Simon Middle School (Hays Independent School District)
Simon Middle School had a lot to celebrate this fall!  Simon placed 1st among Central Texas middle schools and 14th among all participating middle and high schools in the U.S.  in the Get Schooled 2013 Fall Attendance Challenge.  They celebrated with a school “Champion Rally” with performances from their students, cheerleaders, high school dance team and the world premiere of the champion motivational music video for their students
News 8 Austin – Simon Middle School celebrates attendance achievement
Manor Excel Academy (Manor Independent School District)
Way to go, Manor Excel Academy!  Manor Excel Academy finished the Get Schooled 2013 Fall Attendance Challenge 1st among Central Texas high schools and 19th among all participating middle and high schools in the U.S.!  They celebrated with a catered lunch from challenge sponsor Taco Bell and a school dance party.
KUT – http://kut.org/post/manor-school-focuses-relationships-boost-attendance 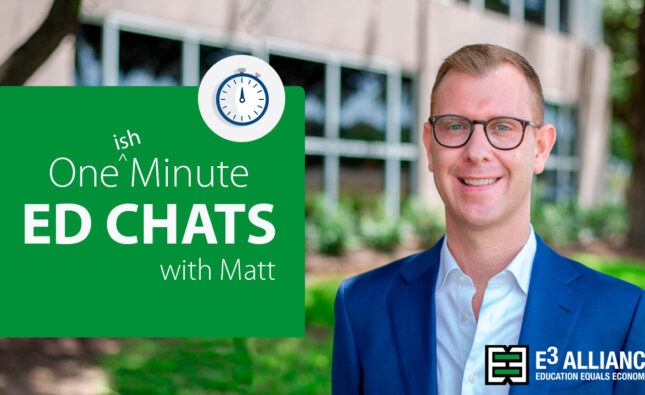 How to Engage Families | Minute with Matt

How to Make Equity the Focus | Minute with Matt