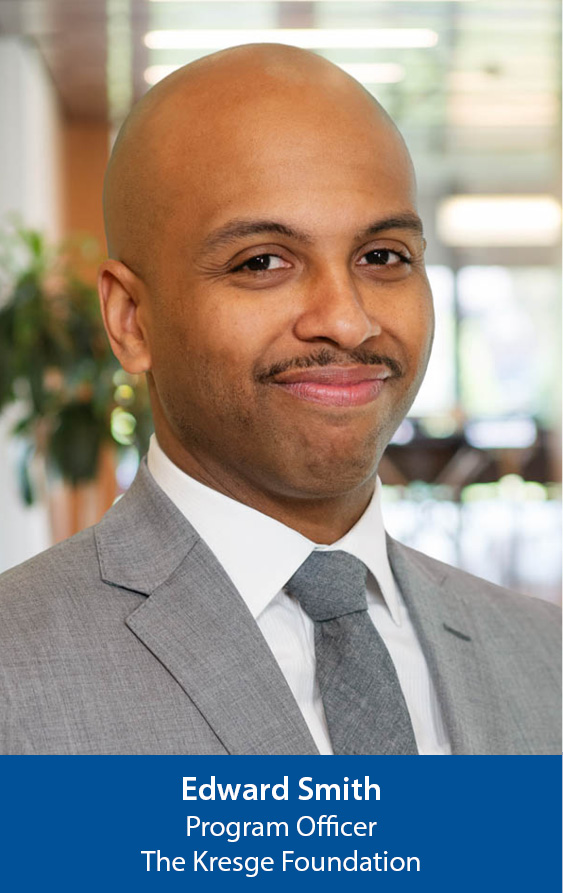 Sebastian S. Kresge founded the foundation in 1924 with an initial $1.6 million nest egg and the noble desire “to promote the well-being of mankind.” The first in his family to attend college, Mr. Kresge worked through his higher education journey teaching and clerking at a local grocery store. His retail experience unlocked opportunities to meet merchandising innovators of the era. He took that knowledge and opened Kresge’s, his own chain of five and dime variety stores. In the 1970s, long after Mr. Kresge’s death in 1966, the store was rebranded as the quintessential department store, Kmart.

Since those humble beginnings, The Kresge Foundation has funded countless grants ($160 million annually), focused on expanding opportunities for people with low incomes in America’s cities. Preferring to balance a long-view strategy with an adaptability to new trends, Kresge concentrates on cities, where more than 80% of the U.S. population lives, and seeks to dismantle structural and systemic barriers to equality and justice. It invests through seven Programs (American Cities, Arts & Culture, Detroit, Education, Environment, Health and Human Services) and a Social Investment Practice.

In November of 2020 and in the middle of global pandemic and racial unrest, The Education Program awarded E3 Alliance a $100,000 grant to support The Scaling Strategies for Low-Income/ Underrepresented Students’ Education Success Initiative. This general operating grant will assist E3 in meeting its college enrollment and completion goals for Central Texas students’ while helping to close equity gaps for students who have traditionally seen the greatest challenges in completing a postsecondary credential.

Several years ago, Kresge was also very instrumental in providing the initial seed investment to help E3 build the capacity of an online portal for the Emergency Bridge Fund that serves the students of the Austin College Attainment Network.  This fund provided emergency grants to first-generation college students from low-income households who were at risk of “stopping out” of college because of a financial crisis. Funding helped them continue their college education.

“The onset of the COVID-19 pandemic exacerbated the challenges facing many students living with low incomes, including housing and food insecurity, as well as limited access to healthcare, childcare, and reliable internet connections,” said Edward Smith, Program Officer with Kresge. “Our work with E3 revealed that many students were already facing these challenges, persisting while in urgent need of financial and social supports. I’m humbled to support the E3 Alliance efforts to deliver timely financial aid and other systemic supports to students in Texas, including those who may have been overlooked or left out of other financial aid programs, to help ensure they can continue their studies and that their degree-completion plans are not derailed.”

Thanks to The Kresge Foundation for its devotion to expanding opportunities to promote human progress for almost a century. As Mr. Kresge would say, “Giving away money is not an easy job. Money alone cannot build character or transform evil into good; it cannot restore the influence or vitality of the home; neither can it maintain the valleys or plains of peace. Spent alone, it might as well stay in vaults. … It cries for full partnership with leaders of character and good will.”